Consent: Not actually that complicated

A short one today as my life is currently very complicated and conspiring against my preference to spend all of my days working out what to blog. But do you know what isn’t complicated?

It’s been much discussed recently; what with college campuses bringing in Affirmative Consent rules, and with the film of the book that managed to make lack of consent look sexy raking it in at the box office. You may not know this, but in the UK we more or less have something similar to ‘affirmative consent’ already. It’s how Ched Evans was convicted while his co-defendant was not – and is along the lines of whether the defendant had a reasonable belief that the alleged victim consented. From the court documents it appears that while the jury felt that it was reasonable to believe that the victim had consented to intercourse with the co-defendant, it was not reasonable to believe that she’d consented to intercourse with some random dude that turned up halfway through (Evans). The issue in the UK isn’t traditionally in the way it’s dealt with in court, but in the way it has been investigated – new guidance was recently issued to try to improve this.

It seems like every time an article is written about consent, or a move made towards increasing the onus on the initiator of the sex to ensure that the person they are trying to have sex with, you know, actually WANTS to have sex with them, there are a wave of comments and criticisms. 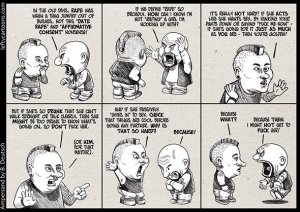 It seems a lot of people really, REALLY don’t get what ‘consent’  means. From the famous “not everybody needs to be asked prior to each insertion” to the student that (allegedly) thought he’d surprise his partner with some non consensual BDSM to that fucking song to almost every damn comment on any article by anyone that suggests that yes means yes; it seems people really have a problem understanding that before you have sex with someone, and that’s every time you have sex with them, make sure they want to have sex with you. This goes for men, women, everyone. Whoever you are initiating sexytimes with, just make sure they are actually genuinely up for it. That’s it. It’s not hard. Really.

If you’re still struggling, just imagine instead of initiating sex, you’re making them a cup of tea.

You say “hey, would you like a cup of tea?” and they go “omg fuck yes, I would fucking LOVE a cup of tea! Thank you!*” then you know they want a cup of tea.

If you say “hey, would you like a cup of tea?” and they um and ahh and say, “I’m not really sure…” then you can make them a cup of tea or not, but be aware that they might not drink it, and if they don’t drink it then – this is the important bit –  don’t make them drink it. You can’t blame them for you going to the effort of making the tea on the off-chance they wanted it; you just have to deal with them not drinking it. Just because you made it doesn’t mean you are entitled to watch them drink it.

They might say “Yes please, that’s kind of you” and then when the tea arrives they actually don’t want the tea at all. Sure, that’s kind of annoying as you’ve gone to the effort of making the tea, but they remain under no obligation to drink the tea. They did want tea, now they don’t. Sometimes people change their mind in the time it takes to boil that kettle, brew the tea and add the milk. And it’s ok for people to change their mind, and you are still not entitled to watch them drink it even though you went to the trouble of making it.

Ok, maybe they were conscious when you asked them if they wanted tea, and they said yes, but in the time it took you to boil that kettle, brew the tea and add the milk they are now unconscious. You should just put the tea down, make sure the unconscious person is safe, and  – this is the important bit – don’t make them drink the tea. They said yes then, sure, but unconscious people don’t want tea.

If someone said yes to tea, started drinking it, and then passed out before they’d finished it, don’t keep on pouring it down their throat. Take the tea away and make sure they are safe.  Because unconscious people don’t want tea. Trust me on this.

If someone said “yes” to tea around your  house last saturday, that doesn’t mean that they want you to make them tea all the time. They don’t want you to come around unexpectedly to their place and make them tea and force them to drink it going “BUT YOU WANTED TEA LAST WEEK”, or to wake up to find you pouring tea down their throat going “BUT YOU WANTED TEA LAST NIGHT”.

Do you think this is a stupid analogy? Yes, you all know this already  – of course you wouldn’t force feed someone tea because they said yes to a cup last week. Of COURSE you wouldn’t pour tea down the throat of an unconcious person because they said yes to tea 5 minutes ago when they were conscious. But if you can understand how completely ludicrous it is to force people to have tea when they don’t want tea, and you are able to understand when people don’t want tea, then how hard is it to understand when it comes to sex?

Whether it’s tea or sex, Consent Is Everything.

And on that note, I am going to make myself a cup of tea.

*I actually said this word for word to a friend in the early hours of Sunday morning after a warehouse party. Tea. It’s fucking brilliant.

all comments are subject to moderation

Tea Consent by RockstarDinosaurPiratePrincess is licensed under a Creative Commons Attribution-NonCommercial 4.0 International License.
Based on a work at http://rockstardinosaurpirateprincess.com/2015/03/02/consent-not-actually-that-complicated/.

This entry was posted in feminism, my opinions let me show you them and tagged consent, feminism, Tea. Bookmark the permalink.

880 Responses to Consent: Not actually that complicated